Now this isn’t my photo or meme, and this isn’t where I usually make mindful statements about someone elses arty / meaningful shizz … so apologies to whoever wrote this … my train of thought today was more in response to this rather than to criticise your truth …

So, that said … I found this in my stash of memes and was about to repost, as it had obviously resonated with Me somewhere along the way …

But yah know what … it just doesn’t anymore … and I got issues with it. 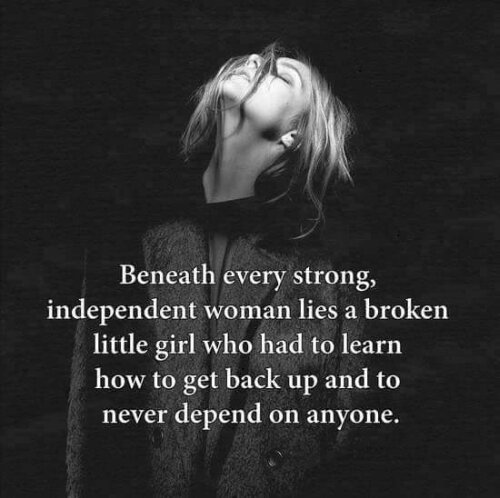 (meme not written by me)

Little girls Should Not Have to Broken to learn how to be strong and independent.

Little girls should be able to depend on those around them, to love her and protect her.

That isn’t her issue … it’s Theirs.

Theres no high-fucking-fives to be had out of being strong and independent from being broken … it’s a stain on our fucking nation that any child is broken!!!

Get my fucking drift????

Strength comes from survival, sure. But would you really wish a whole lot of brokenness on your child so they can become strong and independent? Fuck No!

I think it’s an excuse we’ve all made up so we can justify not having intervened, spoken up, asked the right questions, made the phone call, held the gaze a little longer … all those things that people know they should do but it just feels to darn uncomfortable.

Justifying the strength of a woman later on in her life with the brokenness she has experienced … is not a reason / justification.

This site uses Akismet to reduce spam. Learn how your comment data is processed.